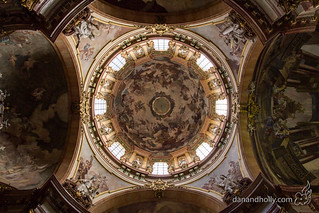 Prague is, among other things, a city of beautiful architecture.  The highlights of the city include a multitude of cathedrals, not the least of which is the Church of Saint Nicholas (Kostel svatého Mikuláše).  You’ll recognize the building by its large green (tarnished bronze) domes, which can be seen from almost any vantage point near the Charles Bridge.

Of the cathedrals we toured in Prague, the Church of Saint Nicholas was one of the more breath-taking.  The ceilings are covered in spectacular frescos, and the upstairs contains a museum of paintings, which were beautiful in their own right.  If you’d like to see the church from the inside, take note that there are two entrances.  The side entrance on the main street that connects to the Charles Bridge is for the tower only, though still worth the money and effort to climb all those stairs.  The entrance to the main part of the building is on up and around to the front.  There are stairs and a more dramatic entrance there… you’ll know you’re there when you see it.  Both entrances have a separate fee, however I would personally recommend checking them both out.