My wife and I stayed here several nights in May of 2010 and enjoyed our stay here. We found the rooms to be clean. As others have mentioned, if you get a room on the street side of the building, ask to be moved immediately. The constant honking of the cars on the street at all hours of the night caused me to not sleep at all. I requested to be moved and the staff did so with no questions asked. Others have also mentioned that there are some nicer rooms and some not as nice rooms in the hotel. We traded one of the nicer rooms on the street side for one of the older rooms on the courtyard side and to be honest… were happy for the trade. The older room was not AS nice, but at least it was quiet. 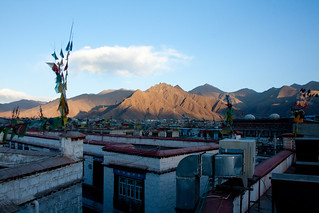 If you enjoy photography, walk around the hotel untill you find the staircase that goes to the roof. It is back in what feels like an alley way (although still inside the hotel courtyard). That is a good spot to take pictures from. Also, at the top of one of the staircases there is a locked door (not the one going to the restaurant)… my wife and I walked out there and it looks like a patio they are in the process of finishing. This is also a great place to take pictures from… although I’m not sure if we were supposed to be up there or not. There was a large rock up there to hold the door open, so we were obviously not the first people to do so. Both locations offer great views of the Potala Palace and sunsets. It is also a good place get pictures of the palace as the sun is peaking over the tops of the mountains.

Stayed May 2010, traveled as a couple