We come in peace! 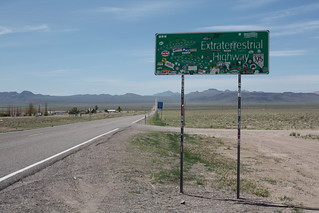 My wife and I went here on our recent trip to the Southwest, and loved it. The ET Highway itself is literally in the middle of nowhere, but is a very scenic and pretty drive. The only real reason to be on the HWY would be as a means to get to Rachel, or just traveling through (to where I have no idea). Going to Rachel and seeing all the Area 51 stuff was high on my list as I’m a bit of a UFO geek. If you’re not interested in this kind of thing though, it’s a 3 hour drive from Vegas for not much… so I don’t know that I’d recommend it to just anyone. If you’ve gotten this far though (to be searching for it on the internet), you’re obviously interested in it somewhat. Very nice people in Rachel though at the little A’le’inn. Stop buy and take your picture with all the alien stuff and have a drink with the owners. They’ve got lots of funny stories. 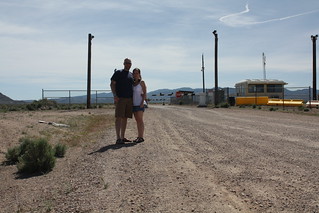 We also drove out the road to the "Rachel back gate", which is one of the two entrances to the Area 51 base. We chose this entrance because there is actually something there instead of just signs and a fence. You can actually see the guard shack and watch the cameras aim at you… kind of funny. The signs say "photography prohibited", but apparently that hasn’t been enforced in a long time. There were people there at the guard shack while we were there and they didn’t seem to mind me clicking away.
Make sure you get gas in Ash Springs as there is no gas station in Rachel, and I believe there was only one in Ash Springs (which you could sneeze and miss).