From 2005 to 2015 the Albino Bowler was Claris Networks’ (now Teklinks) “Flat Stanley” project. Claris employees were encouraged to take the Albino Bowler along with them as they did fun things, with the goal of getting pictures of the Albino Bowler in as many different places and events around the world as possible. In doing so, we hoped to show off “the human side” of the employees by putting on display their personalities and the places they like to go. In the end, the action figure traveled all over the United States and managed to make it to 6 of the 7 continents. The Albino Bowler had its picture made with the likes of Aerosmith’s Steven Tyler and Joe Perry, the Maoi statues of Easter Island, panda bears in China, and countless others. At one point we were even contacted by one of the original designers of the toy because they liked what we were doing so much!

Since I had ultimately been the champion of the project, Claris gave me the Albino Bowler when I left the company in 2015. The company later ended up giving me domain names as well, when it was acquired by Teklinks, and so I am now memorializing it here. Those were good times we had back then! 🙂

Former Claris Networks employee, Greg Kenny, was helping a friend move when they stumbled upon the Albino Bowler in his attic. It had been a white elephant gift won at a company Christmas party; Greg managed to score it as payment for helping with the move. It turns out the Albino Bowler is a bit of an urban legend, and the gist is that this mysterious man randomly shows up at bowling alleys and bowls an incredible game… and then leaves without saying a word to anyone. Just like you never know where the “real” Albino Bowler is going to show up… you never know where the Claris Networks’ Albino Bowler is going to show up either!

Originally produced by Accouterments / Archie McPhee in 2002, the Albino Bowler was one of the company’s random collection of action figures (the company also sold ‘The Crazy Cat Lady’, ‘Mo Moses’, and others). As best I can tell, the company only did a limited production run of Dick (the Albino Bowler’s name) and by 2007 the toys were hard to come by, though there are a few for sale on eBay still. The company went so far as to create a “legend of the Albino Bowler” bit for it’s website, however it has since been removed. Have no fear though, I’ve preserved it here!

The legend of the Albino Bowler began on a crisp October night in 1974, at a small 12-lane alley just outside of Roundlake, Illinois. League night was winding down and, as usual, some of the guys decided to stick around and roll a few games for money. About midway through the first game, the doors swung wide open and a pale figure with a bowling bag stood in the doorway. He walked in slowly, pointed at lanes nine and ten, then sat down to change his shoes.

The locals’ games had all but stopped as they gazed at him with curiosity and amusement. They noticed that just above the stranger’s breast pocket was a hand-stitched name: Dick. Paying no mind to their low murmurs and stifled laughter, Dick put a brace around his wrist and pulled a gleaming white bowling ball from his bag. He squinted at the lane for a few seconds, then took a slow steady approach and sent the ball speeding toward the pins. The ball rumbled out toward the ten board, drowning out the whispers and chuckles, then slammed back into the pocket with a thunderous crash. As the pins lay scattered, some still spinning from the force, Dick turned back toward the ball return, nodded and smiled.

For the next half hour, the locals were treated to an extraordinary display of bowling virtuosity. They watched in awe as he rolled strikes and picked up spares with an amazing array of shots, all executed with uncanny precision and artistry. He never said a word — he didn’t even keep score, and he barely even noticed the spattering of applause when he was finished.

And then he was gone. Before the other bowlers could ask him to join their league he vanished out the door and into the night. Those who were there that night never forgot what they witnessed, and many people have since claimed to have seen his thick sideburns, steely pink eyes and gleaming white ball in some small bowling alley, in some small town on some memorable evening.

If you’re lucky enough to be at one of the small town bowling alleys he chooses to visit, you’re in for a treat. Soon everyone in the alley will be gathered around his lane to witness his extraordinary display of bowling virtuosity and his thick white sideburns. 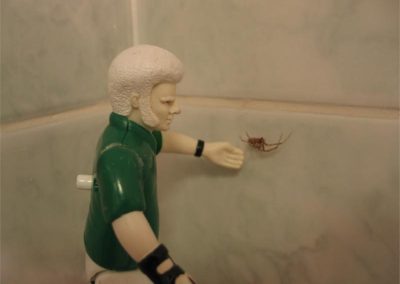